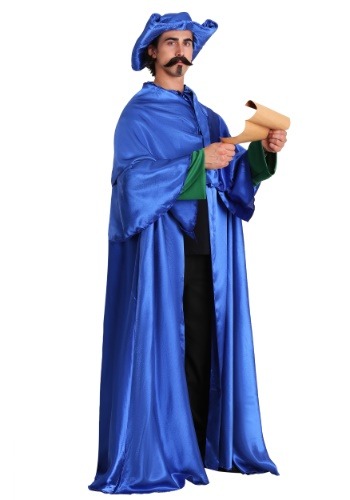 From the outside, the Land of the Munchkins may seem like a place where nothing bad ever happens. Anyone who's familiar with Oz, though, knows that this simply isn't true, and even munchkins have bad days, especially with the Wicked Witch of the East tormenting their countryside. However, the day Dorothy arrived in Oz (and smashed the Witch under her house) was not one of those bad days, and when you're wearing our exclusive Plus Size Munchkin Coroner Costume, you can deliver the good news that the witch is gone to everyone you meet on Halloween!

In the classic story The Wonderful Wizard of Oz, there didn't need to be an official announcement that the Wicked Witch of the East was dead. After all, a farmhouse fell out of the sky over Munchkin Country, and flattened her like a munchkin-pancake, so anyone could tell that she was a goner. But the appointed coroner (we assume he was appointed, though munchkins may elect their town coroners) stepped up, and did his professional duty by announcing to munchkins everywhere that the Wicked Witch of the East, who had ruled and terrorized their land for so long, had bitten the dust, and thus set Dorothy's adventure in motion!

You can pay your respects to this minor but no less important munchkin in our high quality and meticulously detailed costume. We've made the robe out of layered, blue satin material, and the matching hat features a shaped foam brim, to look just like the character's outfit in the story. It'll make a great addition to any Oz themed group costume!