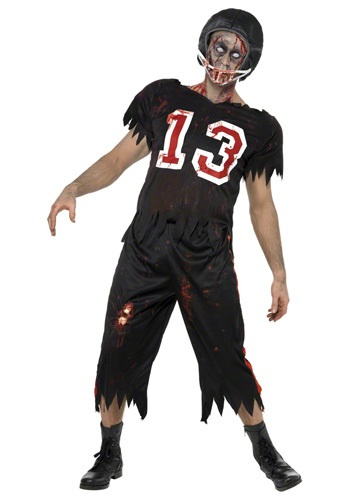 Who's that new player on the team? He's not much of a runner, but once he gets a hold of the ball, he will tear apart anyone who tries to get it back. And then anyone who tries to tackle him. Or, just anyone else who's nearby. Dress up in this creepy Zombie Football Player Costume, and you'll be the MVP (Most Vicious Player) of the undead league!

Nobody really knows where this shambling star of the gridiron came from, or whether he was recruited out of school, or reanimated from spare parts of other athletes. He just showed up one day for practice, and started shuffling toward the other players. The coach didn't know what to do, so he told everyone to hit the zombie, and see how much of a pounding he could take. Needless to say, after cleaning up the mess left behind by the zombie, umm... shrugging off all those tackles, the coach had some open slots on his team, and a great idea of how to fill them! The coach made the zombie an offer, which he assumed he took, since he really seemed to enjoy eating those other players, and there would be plenty more where that came from.

Put on your grossest zombie makeup, because you'll want to look like you've been through the wringer when you're wearing this costume! It looks like a basic football uniform, but tattered up and splattered with fake blood. It also comes with foam shoulder pads under the jersey, and the soft helmet has fake blood all over the face guard. Show your creepy team spirit solo, or with your undead teammates and cheerleaders as a scary group costume!

Size Chart
L
Inches
Centimeters
Costume Sizing Tips
Questions & Answers
There are no questions for this item yet. Be the first to ask a question!
Ask a Question