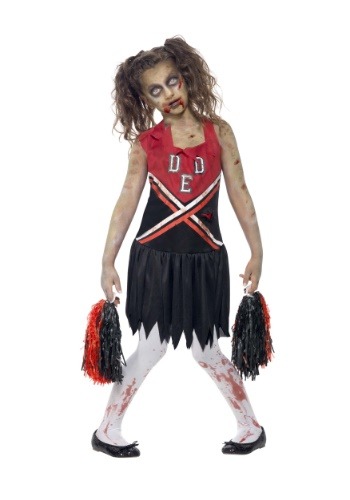 Victory Is Sweet, So Is Flesh

You may be good at football

You may be good at track

But when it comes to feasting

You better watch your back

Cause it's a zombie attack!

An overwhelming amount of school spirit and a perky disposition aren't requirements to make the zombie cheer squad. In fact, they're looking for girls who are the exact opposite of typical 'cheerleader material.' The zom-pom squad is recruiting girls who show indifference to just about everything, except for gobbling up fresh guts. (Mmmm fresh guts!) As long as you're capable of moping around lifelessly while gripping a pair of pom-poms, you'll make the squad. Now get out there and hype up fans to rip apart the opposing team. Literally.

Gear up for the first day of Zombie cheer practice by outfitting yourself in this girl's zombie cheerleader costume. The tank top style dress is made to look shabby, tattered, and disheveled. It features fake blood stains and small rips to appear like you've weathered the zombie apocalypse. Stripes and the letters "D E D" (a fun play on the word 'dead') are featured on the chest while a drop-waist hemline features a jagged bottom. The included pom-poms match the dress perfectly and stay attached to hands via stretchy finger loops. They won't come off unless a fellow cheerleader decides to bite your finger off for a halftime snack, which is a real possibility. (Just kidding, the pom-poms easily slip off the finger, we just wanted to scare ya!)

Like we said earlier, you'll definitely make the zom-pom cheer squad but we'll let you in on a few secrets to really impress the coaches. Grab a pair of blood-stained tights and a zombie makeup kit for a look that says, "I eat brains for breakfast."