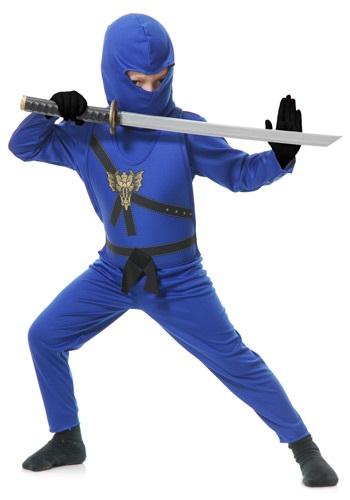 The Legion of the Dragon are mighty ninjas. Stealthy and fast, their feats of dexterity cannot be beat. They have infiltrated countless stows of secreted knowledge, bringing back relics of exotic myth to their hidden base, leaving behind no sign that they had even been present. The few who have seen them skulking in the shadows can only speak of their surprising… height?

Indeed, epic tales are told about the legion of mini ninjas. They are thought adorable, called cute, and, worst of all, underestimated. Their candy-gathering prowess is not to be denied and, even after their successful missions have reached their end, noble Ninja Parents must keep a watchful eye lest this team sneak their own winnings up to their private bedroom lairs to snack upon their joyous rewards.

It is with warning, yet still excitement, that we bring to you the Child Blue Ninja Master costume that will mark your child having completed all necessary training to begin their most grand of adventures and ninjago missions: the candy acquisition! A long-sleeved pullover shirt protects both their identity and flesh from the elements. The front vest bears the renown image of the dragon emblem and the eye-slit hood covers their head during their daring ventures. And, if you dare, you may fill the entire squad with the different colored teammates of black, white, red, and green. Add toy weapons for authenticity and greater candy-stealing might!

Size Chart
XSSMLXL
Inches
Centimeters
Costume Sizing Tips
Questions & Answers
There are no questions for this item yet. Be the first to ask a question!
Ask a Question