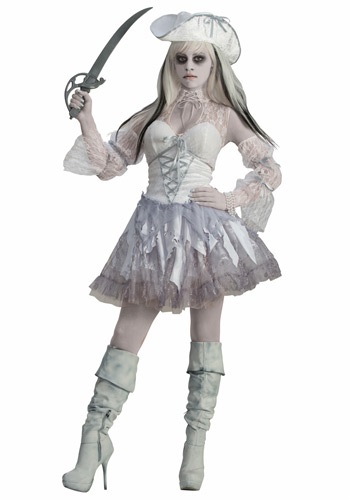 You have to give pirates credit for some creative means of death. Between walking the plank, getting keelhauled, and being marooned on a desert island, if you happened to die under a pirate flag, you at least were left with a pretty cool story for the afterlife. And if that afterlife included coming back to take care of unfinished business, all the better. If there’s anything cooler to put on your resume than “pirate,” it’s “pirate ghost.”

One of the best things about doing your haunting out at sea is that you’re spending all of your time in international waters, where the laws of the land don’t apply. We’re not sure how much credence land-based ghosts give to earthly laws, but we’re pretty sure there’s no such thing as ghost pirate rules. No matter how tough all of your old pirate buddies think they are, they’ll be begging for mercy in a matter of moments once you get to haunting the decks. Anything goes out here, after all, and there’s not much anyone can do to harm a ghost.

Strike fear into the hearts of the so-called fearless scourges of the sea in this spooky polyester pirate ghost costume, featuring an interlock front with lace overlay, foam bra cups, a teardrop neckline, and crushed velvet corset with faux lacing. The skirt has a base of white jersey with layers of gray and white tulle, lace, and tattered jersey. The lace sleeves feature elastic bands and ribbon bows for an eerie textured effect. Top it off with a crushed velvet foam hat for a haunting look that will make a certain crew regret ever having left you out at sea.