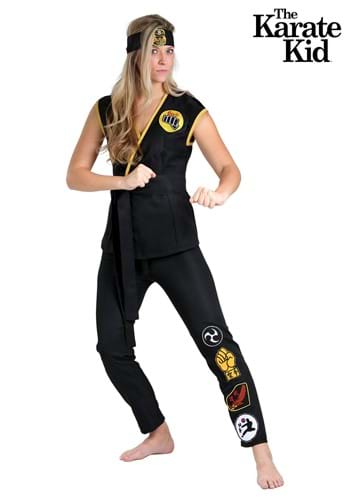 Fear does not exist in this dojo, does it?

Have no fear of the unknown, especially when it comes to your costume life. If you like to draw on the 80s for inspiration, we're sure that you know full well about the magic of the classic flick The Karate Kid. And if you've ever thought about being one of the bad guys in the classic flick, well, here's your opportunity. This Cobra Kai costume for women!

Pain does not exist in this dojo, does it?

Don't feel the pain of a cheap, knockoff costume. Because that's not what we're all about! This signature women's Cobra Kai costume is made right here in our HalloweenCostumes.com studios, and we've partnered with Columbia Pictures to get the details just right. That means this costume is officially licensed, and it's got the movie inspired look to let you become one of Sensei Kreese's top karate champs.

Defeat does not exist in this dojo, does it?

That's right, failure is not an option. But you won't have any doubt that you'll be ready for the All Valley Karate Championships when you have these elite threads. With authentic looking patches, a headband, and a form friendly women's cut, you'll be able to take on Karate Kid cosplay in a whole new way. Team up with your partner as Daniel LaRusso for a fun couples costume, or assemble your group of friends to form your own Cobra Kai dojo.