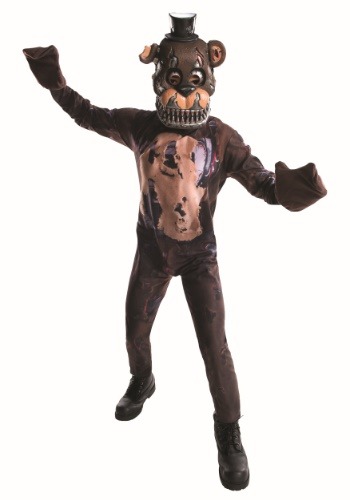 Freddy Fazbear didn’t need any help being frightening. If anything, we sort of wished he’d tone it down a little bit, since that animatronic bear tends to give us nightmares as it is. Just look at him! Couldn’t he put on a fun t-shirt or something to make him look less like a monster?

Well, that’s not the direction they went with Freddy Fazbear in the Five Nights at Freddy’s video game series. Instead, they decided to make him even more frightening by adding some mechanical eyes and exposed wires and they aptly retitled him Nightmare Freddy. Thanks, Scott Cawthon, we’ll just plan on having nightmares for the rest of our lives!

The good news is that if your kid likes the Five Nights at Freddy’s games, then he’s going to have the freakiest costume around. This boys Nightmare Freddy costume takes the horrifying character and turns it into a quick and easy costume for your child to wear. It comes with a jumpsuit designed to look like a savage version of the gruesome video game character. It has printed mechanical details on the chest, along with ripped and tattered fleece in the front. Of course, the best part about this costume is the mask. It comes with a molded mask that looks like Freddy Fazbear. It has faux exposed wires and a ragged face, which reveals a set of fake spiky teeth in front. It even has an ear on the side that looks like someone took a big chomp out of it. It’ll definitely give you the heebie-jeebies when your child wears it for Halloween!

This costume is officially licensed from the Five Nights at Freddy's video game series. We've got plenty of authentic styles, from all your favorite franchises, movies, and shows. Check out our entire selection to outfit your Halloween posse, and we're sure you'll all be set for a great (or very scary) time!

Size Chart
ML
Inches
Centimeters
Costume Sizing Tips
Questions & Answers
There are no questions for this item yet. Be the first to ask a question!
Ask a Question