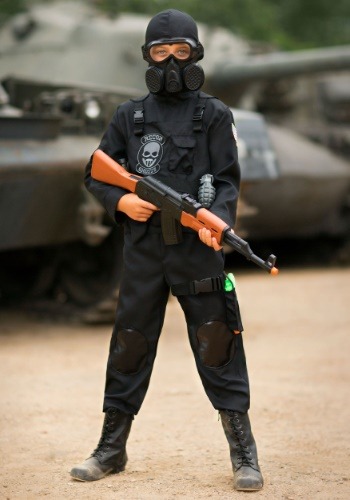 GET INTO THAT TRAINING EARLY

When you're talking about a group called the United States Naval Special Warfare Development Group, you know that this isn't going to be a quick jaunt through a meet and greet interview phase and then onto the adventure.  Officially called DEVGRU but way better known (and much more cooly named) SEAL Team 6, this is a team of practically perfect human beings that work within the Naval branch of the JSOC (Joint Special Operations Command).

Now, we have no actual evidence to suggest that they've taken super soldier serum and are on the same path that a certain star-spangled and shield-toting superhero may have started, but with the crazy training protocols and tests that these guys have to undergo, we're not sure how else they manage to accomplish it all.  They must have started training for this kind of a position in their early days!  We're talking before Middle School!  Actually, that's a great idea!

Our own tactical and reconnoiter team, a joint force of designers and crafters, have been hard at work creating this heavy duty look inspired by the awesome multi-function spec-op team to help your kiddo get a head start on the field training.  This exclusive look includes a dark-colored jumpsuit base and a size-adjustable pullover vest that features numerous pockets and embroidered patches of the U.S. flag and SEAL Team 6 design.  Several fabric holsters slide over the webbing belts, one of which can hold the included safety-green pistol.  The hood and molded gas mask complete this intimidating look and will have your kiddo ready to defend the nation... or at least ready to test for a spot on the team!

WE NEED A HERO!

With an intense exam that eliminates applicants way more often than it accepts them, we need our future Spec-Ops military folks to start that training as early as they can.  And, even if they aren't planning on actually joining the SEAL Team 6, it wouldn't hurt to help your kiddo look like an awesome member for a season!  How many other chances do we have to look like a real life, modern ninja!?