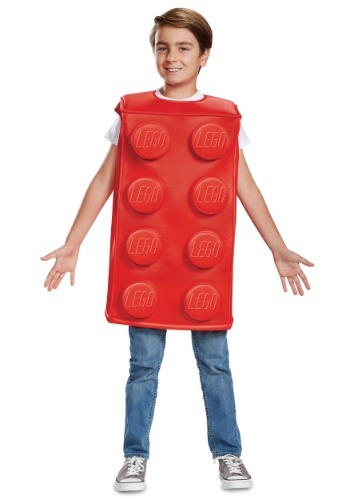 Not Just a Simple Brick

Some might say that there’s nothing special about the humble 2x4 LEGO brick. It’s just a rectangular shaped piece of plastic with the word “LEGO” etched into a bunch of times. How much fun could that tiny little brick possibly promote? How could something so small and plain spark creativity?

Then, there are those, like your child, who know the power of LEGO. They know the truth about LEGO pieces! That one small brick might not seem like much, but combine it with a few more like it and you can build a house. Combine it with a few more and you can turn that house into a castle. Why, with a few other pieces, you could build a pirate ship. But maybe pirate ships aren’t your thing and you want to build a rocket ship. That same, humble little piece can be put to use building that rocket ship. Yes, there’s limitless potential inside that one tiny brick, which is why LEGO may be the greatest toy ever invented, despite its simplicity.

Now, this kid's Red LEGO Brick costume will help your child harness the power of creativity of the humble brick! The costume comes with a tunic-style top that is shaped like the classic brick, making it an easy costume to change into. It fits on easily over your child’s clothing, so they can wear their favorite outfit underneath. It has eight studs on the front and it comes in a bright red color that matches that of the classic LEGO bricks.

Like all LEGOs, they gain power in numbers! Be sure to check out our blue version of this costume, along with our many adult sized LEGO costumes to create a whole LEGO group for the next costume party.