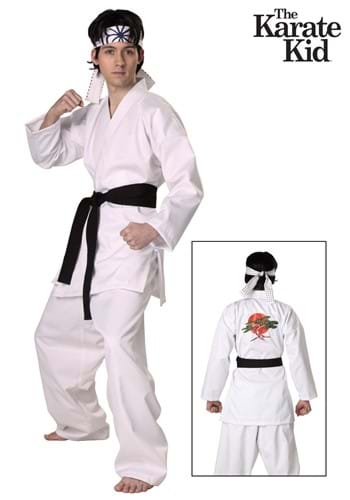 Since long before the epic films came out, we have all had the dream. We wanted to feel pretty amazing, skilled in martial arts, and obviously showing off the amazing black belt. After the movies? Woah. It's all we wanted to be ever again: the Karate Kid! We wanted to master the Crane Kick. We wanted a sensei who knew how to kill a guy with a chop to the neck but wouldn't ever need to actually do it. We even wanted to spend our weekends learning to wax on and wax off... (probably aided by the fact that we actually knew where it was leading). And, still, we want to be the Karate Kid.

You know you do too. You want to hang out with Mr. Miyagi and beat Johnny in the All Valley Karate Tournament. Sure, maybe even get the girl. You want 1984. The music, the fashion, the California sun. You want to dress up as a shower for Halloween. (Wait, what?) Okay, maybe that's going a little bonkers. How about we just stick with the karate part!

If you have the big All Valley Karate Tournament coming up or just need something to wear as you binge the greatest movie franchise ever, just slip on this authentic Karate Kid Daniel-san costume. You will feel the power of the Karate Kid when you put it on. You will be able to catch a fly with chopsticks and do the Crane Kick. Alright, maybe none of that is true, but this officially licensed costume is a great movie replica of Daniel's style and will at least have you feeling like you've brought 1984 back to party!

Wax On With This!

If you're like us, you've definitely practiced the whole wax on/wax off maneuver when nobody was looking. But, when you are in this Karate Kid costume, there's no need to be shy ever again when living out your favorite movie moments.