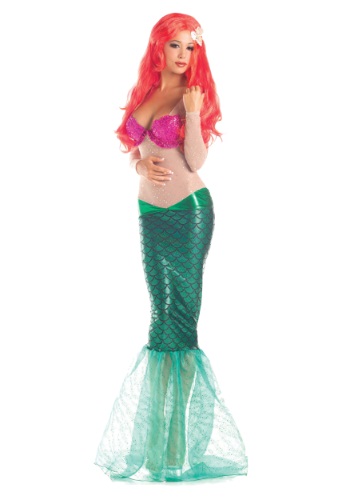 Zeus thinks he's all that, but what's he got, really?! Thunder? Lightening? Big deal! Sure, he gets to wreak a little havoc by making the skies open up, but he also has to deal with all the whiny mortals and their mundane problems. Plus, he's got Prometheus running around and stealing fire well before he was ready to share with anyone. What's up with that?! Seriously -- being the supreme ruler of Olympia is not all that it's cracked up to be.

Now, Poseidon ... Poseidon drew a great lot! Not only does he have a way better name, but he gets to rule the seas and carry a trident. None of those sea creatures every complain about anything. You never hear of a squid going on and on about the color of his ink. Plus, there's the whole mermaid thing. Mermaids are legendary hotties with a naughty streak. Half female, half fish, and all sorts of fun.

If you are in the mood to hang with Poseidon and lure a few ships to their doom, try this dress on for size. The glittery, organza skirt has a scale pattern that is sure to attract boatloads of unsuspecting sailors while the sheer, nude top features a sequined pink bra perfect for when you get tired of swimming around in the ocean and want to sun to yourself on a rock.