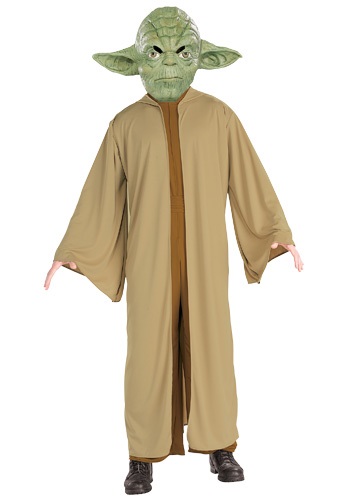 When we try to imagine what Yoda would be up to if he were still alive today, we can’t help but think of him waiting patiently by the phone in his hut on Dagobah. Because with a healthy green glow at over 900 years old, we can’t come up with a face that would be more in-demand to advertise the latest skin care products!

And even if he thought it was wrong to use the Force that way, we think he’d be flattered—though we wouldn’t complain a bit if he agreed to have his impish mug printed on billboards, buses, and the covers of all those magazines in the grocery store. We can’t get enough of the guy!

From his twisted tongue, even the most basic comment seems like a truth as deep as the spice mines of Kessel. So within a few years, people would probably be begging him to give up his lucrative modeling career and enter politics. They’d probably come up with clever chants and carry signs—and dress up in great-looking Adult Yoda Costumes like this!

There just aren’t many outfits that show how big a fan you are of the wise old master of the Jedi Order. And while we have to think that he wouldn’t be in any rush to get back into an intergalactic leadership role, we bet he’d crack that famous little smirk when he saw how many people he’d inspired to get in touch with the Force!