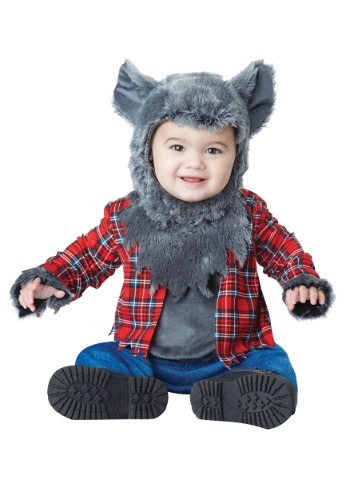 One day, believe it or not, your new pup will suddenly become “too cool” to be a werewolf. Trust us, we’ve seen it a million times. They get all scared the townsfolk will form a mob and come after them with torches, and before you know it, they’re keeping their true identity a secret. It’s a shame, but you know how teen wolves are. That’s why it’s so important to capture those precious moments while you still can… and introduce your pup to the rest of the pack in all his adorable glory before he becomes a big, moody wolf.

Do it this Halloween (or just the next full moon, whichever comes first) with the Wittle Werewolf Infant Costume, which will give your pup a furry mane of wolf hair in the wag of a tail. And because you’re a young werewolf family that constantly needs to keep up with the pack, this getup is easy to get on and off, with a Velcro opening at the back, and pants with an elastic waist so your wolfling doesn’t feel too constricted (that’ll start happening in those pesky teen years we were just talking about. Sorry for the reminder).

Best of all, with a pair of ragged blue jeans and a plaid shirt with unfinished seams, the Wittle Werewolf Infant Costume has that classic “wolfman” look. Because, again, it might be hard to convince him to dress like your heroes (like Lon Chaney Jr. and Benicio del Toro, if you’re into remakes) when he reaches “that” age!