Toddler Queen of the Nile Costume 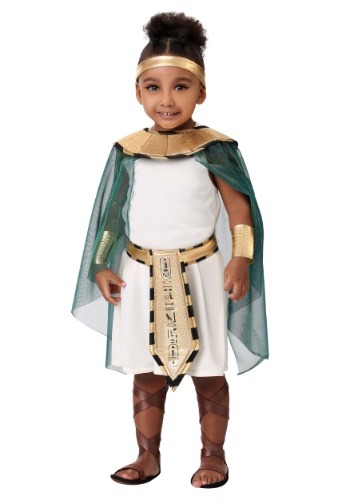 YOU MAY BOW NOW

Little Cleopatra is comin' atchya, by crawling of course, and she's determined to impress the masses. She'll shake her gold-encrusted rattle to get your attention if she wants a refill of her baba and if that doesn't work, then cue the waterworks. Have you ever seen the Queen of Egypt in the middle of a temper tantrum? It's a full-on royal freak out but she's queen so she does as she pleases. From the looks of it, she probably needs a nap. Roll out the golden blankie, fit for a little Egyptian ruler, so she can get a little shut-eye because a well-rested queen is a happy one!

Exclusively crafted in our costume studio, the toddler Queen of the Nile costume includes a sleeveless white dress with a hemline that reaches the knees. The dress is topped off with a round gold collar featuring an attached teal cape made from tulle. The golden belt with ancient hieroglyphics down the front uses a Hook and Loop fastener tab to fasten around the waist. Finally, the stretchy gold headband is included with the dress, collar with cape and belt, to complete the ensemble.

She doesn't just rule the Nile, she rules over the playground, park and playroom. Add a pair of toddler-sized gladiator sandals to transition this costume from indoors to outdoors. Interested in a costume to pair with this one, creating an adorable mommy/daughter look? Dress as a mummy and celebrate Halloween with your lil Cleo!

Be the first to be featured! Follow @@funcostumes and tag us with #funcostumes.