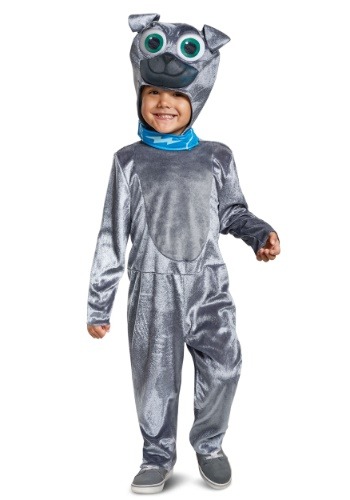 Pugs are quite the paradox. That pudgy little nose and those weird bulbous eyes should disqualify them from the category of cuteness quite unequivocally. Yet, somehow, they might be the most adorable thing on the planet. The way they hobble around on those short little legs just makes you want to scoop them up and hug them for an eternity. The way that little curly tail squiggles around like a spring makes you go, “aww!” and when those giant eyes gaze into your soul, well it might almost bring you to tears of joy. Those little pooches are one meme away from ruling the Earth, so it’s no surprise that your little one is totally obsessed with the Disney Junior show, Puppy Dog Pals.

That’s right! This Puppy Dog Pals Bingo costume is an adorable toddler-sized outfit that transforms your child into the cutest little pup in the neighborhood. The officially licensed toddler costume comes with a soft, gray jumpsuit. The included headpiece is designed to look like Bingo’s face, including his big green puppy dog eyes and his dark gray snout. It also has his bolt-emblem collar that fits around your child’s neck. To top it all off, a pair of cute puppy ears are on the top of the headpiece!

Bring the Duo Together

Of course, the Puppy Dog Pals are only in full motion when they’re together! You may just want get one of your toddler’s friends to dress up as Rolly to unite the adventurous duo of Disney pups.

Size Chart
2T3T/4T4/6
Inches
Centimeters
Costume Sizing Tips
Questions & Answers
There are no questions for this item yet. Be the first to ask a question!
Ask a Question