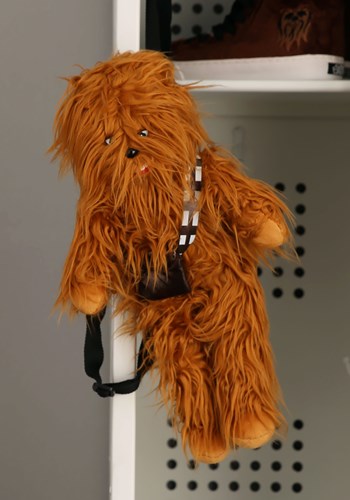 We all know that Chewbacca is the best friend ever. He stands by Han Solo’s side, no matter what! Just look at their long history throughout the Star Wars movies. In A New Hope, he stuck by his side even when Jabba the Hutt threatened them and even when they decided to take on a crazy mission to the Death Star. In The Empire Strikes Back, he followed Han through a dangerous asteroid field. In Return of the Jedi, he risked life and limb to rescue him from the clutches of Jabba’s Palace. We should all be lucky to have such a great best bud!

This little dude might be smaller than the average Wookiee, since he measures about 17 inches tall. He is, however, just as furry as the real thing! He has a small pouch in back, so you can carry a few things with you on crazy space adventures and he even comes with a pair of adjustable shoulder straps, allowing you to take him with you wherever you go!

If you want to be like Han Solo or you just need a furry pal to take with you on adventures, then this officially licensed Star Wars backpack is perfect for you!