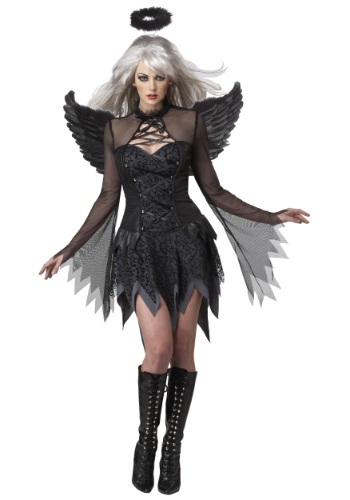 Shoot for the moon, they said. Even if you fail, they said, you'll land among the stars. Well, they weren't exactly incorrect. It's just that putting it in those words was a little misleading about the actual layout of the heavens. Because unless you're moving pretty fast, it doesn't really matter what you aim for: welcome to Earth. On Earth, what goes up must come down, even if it's a beautiful soul like you!

It may not always feel this way, but you are among the stars—even when your soles are planted firmly on the ground. Because the sun may not be a red giant or anything, but it's a stellar body just like Betelgeuse or Alpha Centauri. Okay, not just like them, but in the same ballpark. Listen, we're not astronomers. We just want to help you make the best of a bad situation! You may not have planned on winding up back here, on the third rock from Sol, but an eternity spent wandering the planet doesn't have to be a curse.

Just try on this Plus Size Women's Sultry Fallen Angel Costume, and see if that doesn't make your burden a little easier to bear. This lovely combo includes the tattered dress, sable wings, and dark halo preferred by those who come up a few light-years short of the pearly gates. Add an ashen wig and the right pair of boots, and you'll look almost as stylish as you did in life!