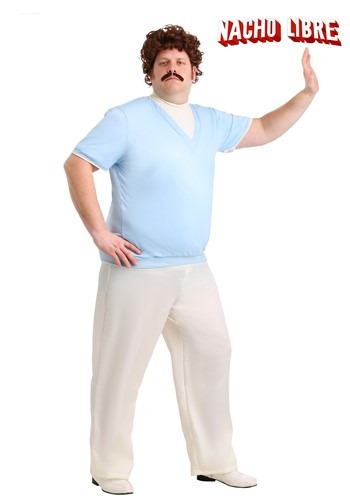 What does it take to be a hero? We wonder that all the time. Since we've got so many different kinds of heroes, really, that could probably be answered a lot of different ways. For example, Stan in our Subdivision of Nutrition And Choice Cuisine (SNACC) considers any who bring authentic Mexican food to the office is an instant hero. (We really can't argue with Stan, there!)

That might be why we consider Ignacio (better known as Nacho Libre) to be among the most important heroes of our time. Not only is he willing to stand up to help out all the orphans, but he's willing to do it all in a mysterious luchador mask so that no one even knows the identity of their hero! He's basically the Superdude hiding in plain sight with his seemingly simple, everyday attire!

It is time to honor our favorite Luchador in his casual style with this Naco Libre Leisure costume! Stan paid off our design team with a month of Taco Tuesdays so they would put together this officially licensed look based on Ignacio from the film. (Though, we all love the idea of the film so much, they would have done it for free—but who turns down tacos?) You're going to love channeling your inner hero with this pair of ivory slacks and the sweater-like light blue V-neck shirt with ribbed hems. Complete your look with the wavy wig and profound mustache and all you'll need is your secret luchador moves to be our hero!

For a long while, we thought that 'Nacho' in Nacho Libre might have referenced the delicious appetizer. (That might just be Stan talking.) It's probably actually short for Ignacio's real name. But, when you're wearing this leisure look from the film, you'll feel just as 'libre' (liberated and free) as our favorite secret Luchador Superhero!