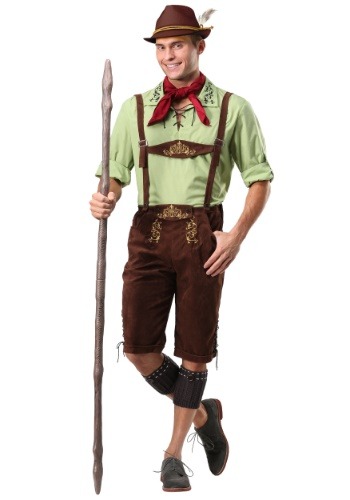 It's Better in Bavaria

Lederhosen are fascinating. We're kind of obsessed. For instance, did you know that the singular of "lederhosen" is lederhose? But why would you ever have just one...lederhose? That's like having one short instead of shorts, you know? It's just not what people do. Also, lederhosen were originally made for the working peasants, out of leather (because it was easier to clean). The shorter length made them easy to move around in and more affordable, but over time, lederhosen became more associated with fun, tradition, and festivity in the alpine regions of Germany, Austria, and Switzerland.

But you already know all this, naturally. That's why you're eying this Adult Alpine Lederhosen Costume for your next festive event. Whether you choose to rock it at the beer garden or bring home the prize at the costume competition, this playful and historical look pays homage to your heritage while showcasing a fashion statement the world can't get enough of...lederhosen!

This classic costume was designed with detail in our costume studio. Made by Us to uphold your high standards, this costume comes with the shirt, calf warmers, hat, scarf, and...duh!...lederhosen. Both the green shirt and the striking lederhosen have embroidery and cording details, while the style-specific hat has rustic cording wrapped around it, as well as a sweet feather. You look determined to turn Halloween into an extension of Oktoberfest, and we personally can't see anything wrong with that!

The Leder of the Pack

It's no wonder your crew looks to you for advice and ideas—look how fantastic you are in this authentic lederhosen costume! Now, remember you are representing a classic style and time period known the world over, so don't underestimate the power you have to command attention and demand greatness from the party. Anything less would be as uncool as...well...as a single lederhose.