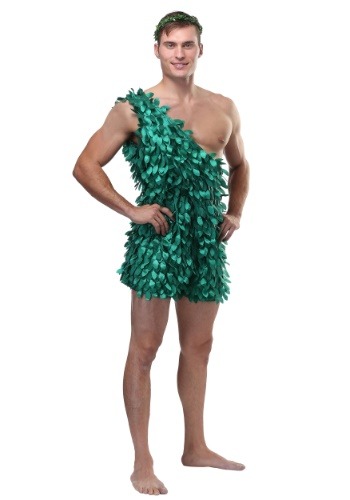 Turning over a New Leaf

There's talk about how lonely it is to be at the top. The top is nothing. Imagine how hard it was to be alone at the very beginning. There was no one to talk to with! No "how was your day" or "wow, that fig leaf would make a great hat!". Nope, Adam got to screech with the monkeys and cluck with the hens but that was it. Don't get us wrong, we're sure he had fun before God put him out and took a slice of his rib to make his mate. There were trees to climb, pools to discover, and animals to name. The land was brand spanking new and there was a lot to do! But we didn't say that boredom was the problem, did we? No, he needed another person, someone to argue over the names of the animals with. Someone to exclaim over the beautiful views when Adam showed his companion his favorite tree. Paradise wasn't much if there was no one to share it with!

Celebrate the fact that we're so far from being alone with this lovely Adam costume! It's Made-By-Us so not only does it have a unique, well thought out design, it's also of a higher quality, allowing you to wear it again and again. The one-shouldered look is daring while the three-dimensional leaf texture won't let anyone mistake you for a caveman. The looks is topped off with a leafy crown, giving "Adam the first man on earth" honor he deserves!

One for the Good Book

When it comes to dressing up biblically, this is one of the best ways to go. We haven't been to Eden for quite some time, this is a great way to get a little paradise back. You can team up with Eve or go it alone like back in the beginning. Just one more thing? Avoid apple pie, no matter how tasty it might look!