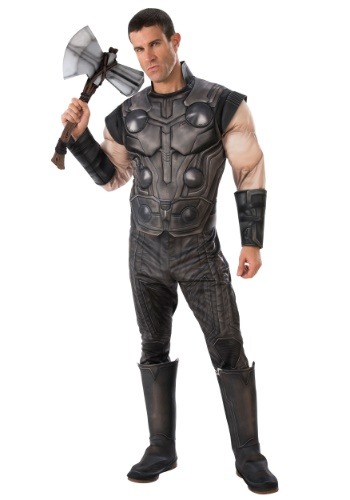 Yeesh! These last few years have been a real rollercoaster and the bad luck just keeps landing on Thor! First, his brother, Loki, steals the throne in Asgard. Then, his dad, Odin, kicks the bucket. After that, his long lost sister comes back from some kind of prison to wreak havoc in his homeland. They duke it out for a while and then Thor gets stranded on a crazy arena planet, where he has to fight one of his co-workers that has some serious anger issues. Now, Thanos wants a piece of him? Can’t a Norse god catch a break?

Well, maybe he can get a break. All he needs is someone who can fill his shoes for a while as he takes a little vacation. Perhaps you could moonlight as Thor, Marvel’s god of thunder, while he hangs out with Darryl for a while to, you know, recuperate from all of the troubles he’s been facing lately.

This deluxe Thor costume is officially licensed from Avengers: Infinity War. It comes with everything you need, aside from the superpowers, to become the thunder-wielding superhero. The included jumpsuit has printed details on the front and back, including armor on the front and large muscly arms. Speaking of muscles, this jumpsuit has muscle padding in the chest and arms, so you don’t even need to hit the gym to get a buff look. The boot covers fit over any pair of shoes, so you can wear your favorite pair with this costume.

Make Friends with a Rabbit

When you have this costume on, the real Thor can take a break from his busy life while you head on adventures across the galaxy! Who knows, maybe you’ll even bump into the Guardians of the Galaxy and make friends with Rocket Raccoon. You can even call him "Rabbit" if you like.