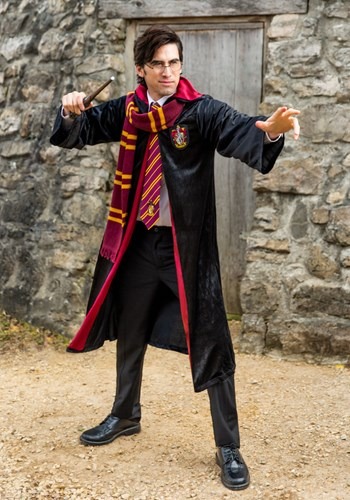 The team that was Moony, Wormtail, Padfoot, and Prongs created some pretty astounding moments between 1971 and 1978 when they prowled and howled through the halls of Hogwarts. But, the Marauder's days are long over (for several different reasons). That doesn't mean that Hogwarts has to be without a quartet of mischief-makers. In fact, rumors are ripe among the portrait spirits and ghosts that a new team has formed ranks for even better tales to tell!

Not only are the marauding adventures not over for House Gryffindor, but the new foursome of Hogwarts hopefuls includes a grand member from each of the famous houses. Everyone knows that no true adventure is complete without a well-rounded group... and every group needs a leader! It's time to step into the role of a lifetime as the Gryffindor member. Wield your heroic qualities and lead the team so you can show Hogwarts that its stories are far from finished!

Naturally, no esteemed member of the Hogwarts Heroes can wear any standard robes thrown into the bargain bin at Madam Malkin's shoppe. You'll be going deluxe with these officially licensed Gryffindor Robes. You'll have a knee-length, black velour robe with a loop and button at the neck. The hood, lapel, and trim are lined in shining maroon satin and the robe features the embroidered Gryffindor crest on the chest. Accessorize further with your choice of wands (and a scarf for the rough winter seasons) and you will have folks trying to remember who Harry Potter even was!

Many wizards aspire to be shown upon the Famous Wizards and Witches Cards... but none will hold a chocolate frog to you when you sport this Gryffindor Robe. Team up with the rest of your Hogwarts Quartet and you'll have your mischief managed in no time!

Size Chart
2X3X4X
Inches
Centimeters
Costume Sizing Tips
Questions & Answers
There are no questions for this item yet. Be the first to ask a question!
Ask a Question