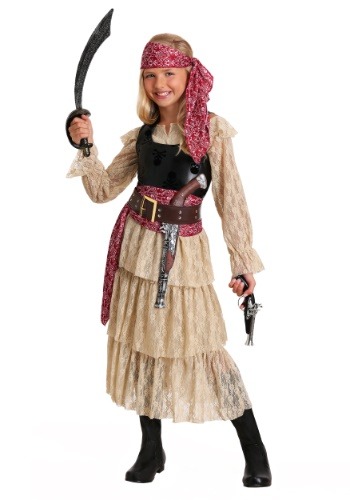 Ok, we're going to stop you right in your tracks. We know the first thing that came to your mind with this costume was "no." She's too young to be a swashbuckler. Too cute to be sea scum. Too nice to be a pirate!

We're not going to disagree with you, but we think you should give it a chance. After all, life on the high seas is a life of adventure. She's going to learn all kinds of things about the world and, chances are, when it's all said and done, she's going to be leaving the ship with a big chest of gold. That doesn't sound so bad!

If you're still on the fence about committing her to the pirate's life, lets just give her a dry run with this girl's Sweet Swashbuckler costume. This elegant costume set will give her a taste of a pirate's life with zero commitment to a life of swashbuckling!

As a dress, vest, scarf, sash, and belt ensemble; this costume set will have her set up as a pirate who's not necessarily fierce. The dress looks smashing accented by the vinyl vest, and printed sash and scarf. With plenty of skull and crossbones to spare, this costume set is sure to make her feel like a real deal pirate.

Suit her up to set sail, or just for some Halloween fun. We're sure when she has this costume, she'll be the sweetest swashbuckler the seven seas has ever seen!