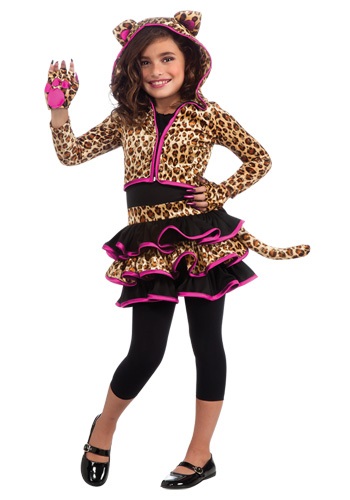 This one's for both of you.

We're talking about both the little lady in your life with style, sass, and fondness for felines; and you, the one who sees in her the ferocity, grace, and pride of one of the most feared jungle cats. In arguments with her siblings, of course, you might also hear similarities in her roar. And in, on some unfortunate occasions, her pounce and her claws. But that's neither here nor there. Remember that grace?Anyone can add a set of ears to a headband or paint whiskers onto their cheeks, but your daughter deserves a full feline makeover, don't you think? Well, you're both in luck!

She'll be roaring with only joy over this wild costume, which embodies all of those qualities while not skimping on the small but ever-important details. Just like the cat itself, she will look equal parts majestic and fierce in the tiered skirt of this Girls Leopard Hoodie Costume. The leopard print hoodie goes so much farther than simple fake whiskers, featuring plush cat ears on the hood, a plush tail attached with Velcro to the back of the dress, and cat paw gloves on the wrist. Just make sure she doesn't feel too in character when she gets her paws on all that candy—a Leopard-sized appetite and the resulting tummy-ache is no joke! Trust us, we know.