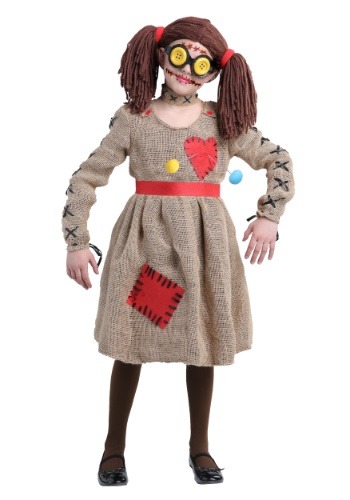 Well, you always warned your kid away from the occult but as you know, once you tell a child to stay away from something it becomes irresistible. She has always had a mysterious side--when she was a baby she would stay up and howl at the full moon. And when that baby was beginning to walk cats that would normally avoid children came to press their heads against your toddler's chubby legs, so maybe it's no one's fault that your kid's a little wrapped up in Voodoo these days.

Voodoo is harmless, they said. It's all about the good vibes, they said. How's anyone supposed to guess that your kid would turn into an actual Voodoo doll? It first started when your child came to you wanting to try out an interesting new camp called "Charm Camp". You thought it was going to be more like a finishing school, she'd come home more gregarious and polite but you were so wrong.

When she stepped off the bus home she had a backpack full of oils, interesting feathers, and beads that she wouldn't explain. That didn't concern you too much, every camp has crafting, right? Lately, though, you're starting to worry. You're pretty sure wearing burlap dresses and hanging around limply like a doll isn't a new trend. In fact, you think this new doll-like demeanor has something to do with that sulfuric explosion that happened in her room last night.

Well, all parents learns from their mistakes. Next time you hear hours of weird chanting coming from your child's room you should probably check in on her, even if she has that "keep out" sign on her door. At least this Voodoo doll look has arrived in time for Halloween, she's sure to win the costume contest this year and you can figure out how to turn her back afterward. We wouldn't worry, this enchanted doll state is probably just a phase.