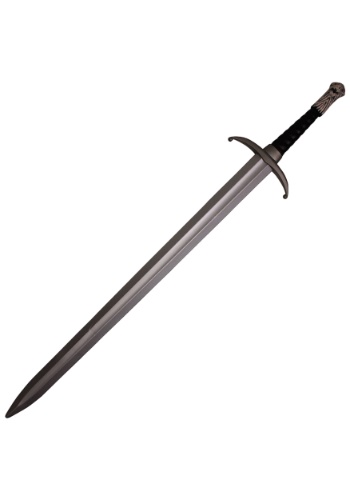 Valyrian Steel is a real hot commodity in Westeros since the Doom of Valyria. Actually, it was a pretty hot commodity before the Doom, too. Lords from all Seven Kingdoms would travel to Dragonstone to get themselves a sweet steel sword forged with spells, and they'd pay a pretty penny too. It's just that they're rare now. Like super rare. Since the Doom wiped Valyria and all their advanced knowledge off the face of the world and all.

Fact is, generally, to get your hands on one of these swords, you'd have to inherit one from your Father. Several houses in Westeros keep one of them in their lineage, and House Mormont of Bear Island is, of course, is one of those houses. Lord Commander of the Night's Watch Jeor Mormont happened to have his family's sword, Longclaw, with him during the course of events of Game of Thrones and everyone was real surprised when he gave it to Jon Snow!

Well, a few seasons later, and Jon Snow is using Longclaw to kill White Walkers. Turns out the spells forged into Valyrian steel works real good for that! So, it goes without saying, if you're suiting up in a Jon Snow costume, you're going to need a replica Longclaw. And this sword is just the one for you! Game of Thrones and HBO officially licensed, this detailed foam sword comes with a collector's box, and it features all the details from the show right down to the wolf on the hilt. It might not be real Valyrian steel, but we're sure you'll be glad to have it around anyways. Because it's not like you're going to be facing off against real White Walkers, right?