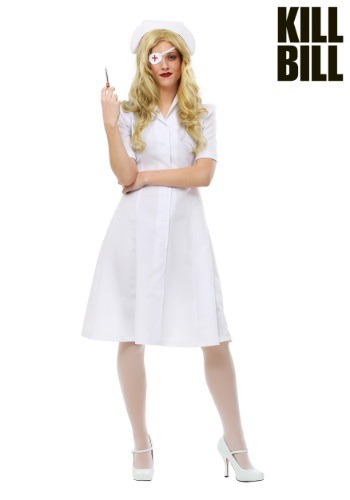 “I might never have liked you. Point of fact, I despise you. But that doesn't suggest I don't respect you. Dying in our sleep is a luxury our kind is rarely afforded. My gift to you.” - Elle Driver, Kill Bill, Vol. 1

Elle Driver, AKA California Mountain Snake, is one cold-blooded assassin. Poison may be her preferred method of execution, but she's also quite skilled with a katana and she even studied kung-fu under the great Master Pai Mei. She's not the type of woman that you ever want to cross, but Beatrix Kiddo never got that memo. Now, she's going to have to face the wrath of Ms. Driver and she has no problems disguising herself as a nurse to make sure the job gets finished. If you're planning to be like Elle, then it all starts with this licensed costume from the Quentin Tarantino film.

This Elle Driver nurse costume comes from the scene in Kill Bill Vol. 1, where she attempts to seal The Bride's fate with a syringe filled with poison. The costume starts with a white button down dress, just like the one worn by Daryl Hannah in the film. The matching hat continues the look from the movie. Of course, the illusion isn't complete without her signature eyepatch, which is also included with this costume ensemble. The eyepatch fits around your head with elastic and features the bright red cross on the front. You may find yourself with an unquenchable thirst for violence when you wear this costume, so you'd better hunting for some Hattori Hanzo steel now!