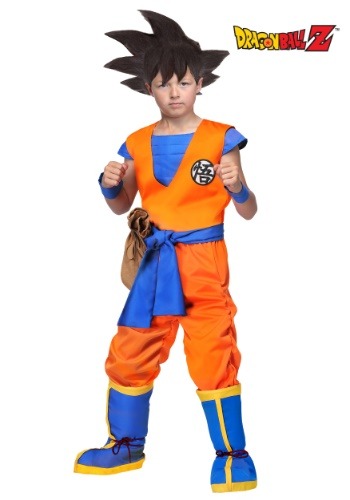 It takes tons of energy to become one of the Z-Fighters. After all, they're the first line of defense against evil aliens, deadly androids, and magical djinn creatures—they need to have a good Kamehameha Wave at the ready. Does your child have that level of energy? You know, the kind of levels that would make Vegeta smash his scouter? Well then, maybe it's time to start training him like Goku!

Of course, you'll need to teach your child all of the important techniques from Dragon Ball Z, like the Kamehameha Wave, the Kaio-Ken attack, the Spirit Bomb, and the Instant Transmission. So, make sure you brush up on those! You also might want to get your child an official Z-Fighter uniform, but no worries, since this Dragon Ball Z authentic Goku costume comes with everything that your child needs to become the powerful Akira Toriyama character (aside from the Saiyan heritage).

This officially licensed Dragon Ball Z costume for kids has a look straight from the anime series. It comes with the blue undershirt that Goku always wears, along with the bright orange top and matching pants. The front of the orange top has Goku's symbol on the front (which loosely translates to the word "wisdom" in English). It also comes with a blue sash with an attached brown satchel for carrying Senzu beans! A pair of wrist cuffs and boot covers are also included to put the finishing polish to the iconic look.

Once your child is all dressed up in this costume, he'll be ready to put all of his energy to use! You'd better be ready to send your little fighter on a mission to battle against the forces of evil in your neighborhood. You might even want to check out some of our adult Dragon Ball Z costumes, so you can help your child defeat nefarious villains. Just imagine it! You could dress up as Piccolo and team up with your child to defeat Frieza yet again.