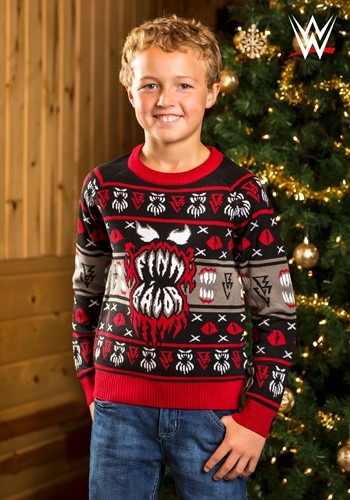 Let us tell you the story of how Finn Balor saved Christmas!

He iced over windows and was up to no good.

Then he crafted a devious idea and he chuckled in awe

So each and every present would be inevitably delayed.

That’s when Finn Balor showed up in full war paint

And he was ready to show no restraint

An elbow drop, a brainbuster, and a Prince’s Throne

It was the worst thing that Jack Frost had ever known!

“Thank you, Finn!” Santa said with a cheer

And Finn rode off into the night

As Jack grumbled, “I’ll get you next year!”

Now you can commemorate the amazing tale of how the WWE’s own Finn Balor defeated Jack Frost in a flawless victory with this Finn Balor Ugly Christmas Sweater for kids. The acrylic knit style is both comfy and warm, but the best part is that it has designs based on Finn’s signature body paint that he wears in the ring. It’s a great way for any young WWE fan to keep warm during the holidays. And it also helps ward off that devious Jack Frost!