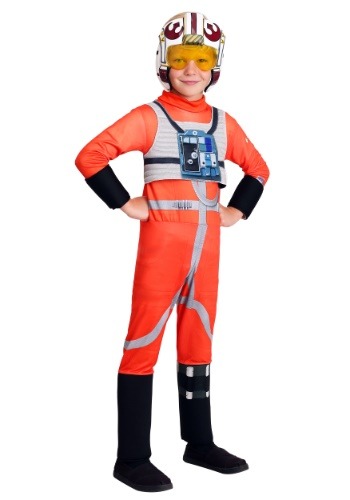 Talking about the Rebellion? We hear they're getting pretty darn close to beating the Empire, but that they're also looking for some bold new recruits. With an important prerequisite. They've got to have good aim! It takes a precise shot to take out those pesky Death Stars, and they need the bravest pilots to step up and try to help save the day. If you can bullseye a womp rat with a T-16, well, then they'll teach you the rest!

So, got someone who's ready to be a Rebel? All we gotta do is get them suited up to hop into the cockpit of a venerated X-Wing starfighter. Pilots of the Alliance to Restore the Republic typically wear orange jumpsuits, and they've got plenty of handy doo-dads attached to help them accomplish their mission. And guess what? We've got the perfect replica. This Kid's X-Wing Fighter Costume is ready for action!

This X-Wing Fighter Pilot Child's Costume is Star Wars and Disney officially licensed. It's styled as a jumpsuit with printed details, it also has a foam vest panel attached for an extra touch of authenticity straight from the movies. The included plastic mask completes the effect, and will have him ready to jump into that X-Wing!

Your Source For everything Star Wars

Fact is, we're fans of costume fun, and there are few themes that are gonna be more fun than Star Wars. So, whether your shopping for kids or adults, we've got plenty of costumes from Star Wars that are sure to be just the thing. Band together your group of Rebels, or even strike back from the Dark Side as Darth Vader or a villain like Boba Fett. Better yet, get all your friends and family in on the fun for a great group theme!