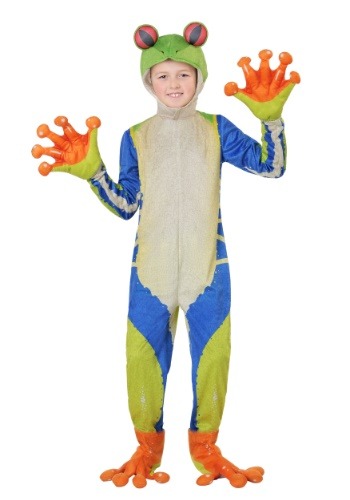 You know that quote about a frog turning into Prince Charming after a kiss? Yeaaa, we don't really get that. To us, frogs are already extremely charming. In fact, we don't think it's possible for them to get any more charming. They're the perfect mix of unusual and adorable. They have large eyeballs protruding from their face and they always seem to be smirking in a way that says, "I know something you don't know." They're coated in a semi-slimy skin, begging us to give them a tiny squeeze. Instead of walking or running, they hop from lily pad to lily pad. That action alone makes us squeal with delight. And don't even get us started on the cute croaking sound they make! (Insert heart-eyes emoji here.)

There are many different species of frogs in the world (over 4,000. Can you believe it?) but the exotic rainforest tree frog is a fan favorite because of their colorful markings, which is why we wanted to create this costume. Modeled after the red-eyed frog, it's a great look for kids who are frog-obsessed, just like us. Like we said, we already think it's a charming look, but you can always wear a crown, reinforcing you're a prince.

Our team of talented designers are frog people too which is why this costume is so realistic— they love studying frogs in the downtime. The high-quality jumpsuit features a fully-functioning zipper in the back for simple removal. The headpiece attaches under the chin via a Hook and Loop fastener tab. The headpiece has attached red eyeballs on top, perfectly recreating a life-sized quintessential tree frog. The included gloves and shoe covers have rounded finger-like appendages to devise the amphibious look

Spring into action and pick this costume before it hops away. Just kidding, it's not going anywhere. It's a keeper!