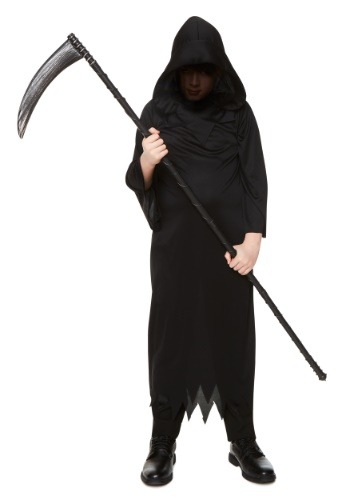 Your kid doesn't want to be something scary for Halloween...they want to be THE something scary. There are a lot of creepy creatures floating around this time of year—witches, ghouls, ghosts, zombies, clowns (shudder), vampires, goblins, politicians—but none even come close to the cold hand of death that is....the Grim Reaper. This ghoulish figure takes souls to the next world, and not in a nice way...you know what we mean?

This Child Grim Reaper Costume is the ultimate in fright-inducing dress-up looks. In fact, your child may not even be able to wear it to the school costume party, that's how terrifying it is. But it's perfect for trick-or-treating and upping the terror level in the neighborhood. Just make sure they don't use it on their little sister as she's trying to fall asleep—that kind of scare can keep a little kid up for weeks!

This is the real deal, taken straight out of your kiddo's worst nightmares! The costume is comprised of a simple black robe that's easy to slip on over black pants and boots—because if you're really the Grim Reapthenthan you're pretty busy; you don't have time for a lot of bells and whistles. There is a jagged-hem hood with a creepy black mesh veil that covers the face from obvious identification, but that still allows for your kiddo to see what—or who—they're reaping! Trust us, the veil is the creepiest part. Oh, except the scythe accessory you can add to ensure everyone knows just how much they do NOT want to mess with your child. That's pretty terrifying, too!

Of course, everyone knows that the most common cause of death on Halloween is an accidental candy overdose. Oh, your child doesn't seem to know that statistic? Hmm...better share it with them. They wouldn't want to become one of their own victims, would they?