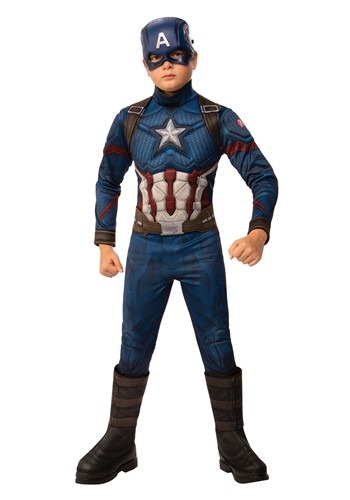 It's been a long road for Steve Rogers. First, he conquered the Nazi faction of HYDRA as they attempted to create a host of weapons from the mysteriously glowing blue cube. Then, he had a bit of an ice bath for a few decades before being recruited into S.H.I.E.L.D. where he was quickly facing an army of aliens being warped into the world from the very same Tesseract! He's had fights with all sorts of big-game baddies and even some conflicts with friends.

Let's not forget the fact that this big-muscled soldier started off with a big heart... and not much else! Some might have called him a runt and even laughed at the idea that Steve might one day become even a regular soldier, much less one who would save the world a half-dozen times! Fortunately, he had the heart to try and earn the rank of Captain America, because we're going to need some help for one last adventure!

It's time to see your kiddo go the way of the Cap with this officially licensed Captain America costume from Avengers: Endgame. This jumpsuit features the rugged and powerful design of Steve Rogers's look from the epic conclusion of the Marvel Cinematic Universe, including the broad blue base, central white star, and red and white stripes. No need to worry about a bunch of straps and such since they're already printed on the costume. That means your kiddo can focus entirely on the heroics!

The Captain America and Avengers films may have reached their final endgame but that doesn't mean that the fun has to be all over. With this Captain America costume, your kiddo can keep feeling heroic and kicking the rear ends of the bad guys for a long time to come.