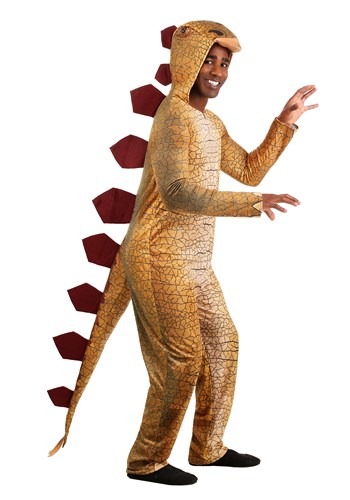 Time to rule, and we mean rule, the Halloween dinosaur scene. Sure, there are a lot of dinosaur costume-wearing folk who are always out and about on the costume party circuit, but it's safe to say that they're not exactly unique. There are plenty of T-Rexes and movie dinosaurs to be seen on Halloween night, but we think its time for a new dinosaur species to rise to the top. Basically, what we're saying is, it's time for the age of the Stegosaurus.

You were probably intrigued when you read about Stegosauruses as a kid, but perhaps you never appreciated them for the all-out brawlers they truly are. Yes, of course, they're plant-eaters, so they might not seem as vicious as a carnivorous Rex, but if you check out those spikes and spiked plates on their back, it should be obvious that they can throw down with the best of them. Just imagine those brutal spikes taking out a pack of velociraptors! Yup, you'd be making a wise choice to go as this tough dino, and we've got the goods to make it happen. Just get this Spiny Stegosaurus Costume and you'll be ready for Jurassic action!

A Made By Us exclusive, this Stegosaurus dinosaur costume was lovingly crafted by our team of costume developers and graphic designers. Most of them will admit that they're pretty big dinosaurs fans! It's designed as a hooded jumpsuit and constructed with soft polyester velour. The finish of the suit is printed with scale patterns and gradient colors, each detail having been painstakingly designed by our graphic artists. It features a plush dinosaur face hood, with plastic eyes and a padded snout, and the signature soft-sculpted plates run down the back of the suit to the tip of the padded tail. it even has little spikes at the tip of the tail. We didn't want to forget those since they were the signature weapon of the Stegosaurus!

This Stegosaurus costume will not only be an awesome homage to the classic dinosaur this Halloween, but it's also going to be a unique dinosaur costume that's sure to attract some fun attention at any costume party. And, if you happen to run into any Rexes, don't sweat it, because you can just swing that plush tail at them to keep them at bay!