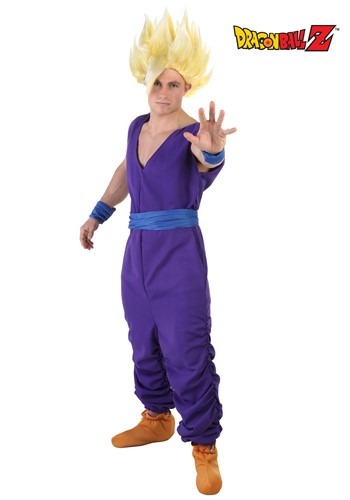 Pop quiz: What hero can fly, has super strength, and fights to protect Earth from anyone wishing to do it harm? If you thought we were talking about Superman, you thought wrong. It’s Gohan, the eldest son of Goku, and possibly the strongest Super Saiyan Earth has ever seen!

You may remember Gohan’s first introduction to the Dragonball series, when he was just a very young boy kidnapped by his mean old Uncle Raditz, who randomly showed up from outer space one day. But even at that young age, Gohan showed his unlimited power by single-handedly defeating Raditz in a fit of uncontrollable rage. You’ll feel his hidden power when you slip on this Adult Gohan Costume. Luckily, you won’t have to train to fight against Cell himself just to unlock your true potential. When you put on Gohan’s purple jumpsuit, you’ll feel the strength of generation of Saiyans behind you. You won’t be afraid to train in the Hyperbolic Time Chamber, and you’ll be brave in defending Earth from the likes of Frieza, the Androids, and Cell.

With this officially licensed costume, which includes a purple sleeveless jumpsuit, blue armbands, a waist sash, and tan foot covers, even Piccolo might not believe that you’re not his former student. Now go on, and protect Earth with your best friends, Krillin and Yajirobe, maybe that troublesome Vegeta, and of course, Goku. Just don’t be afraid to unlock your full potential!