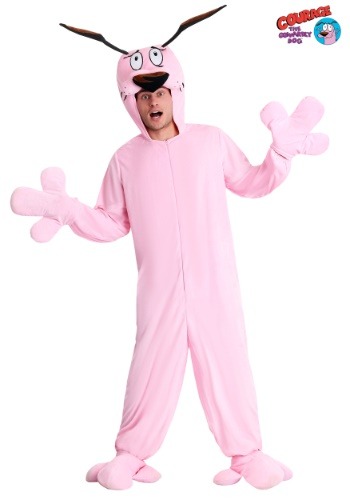 Poor Courage is somehow gifted with the most ironic name in the whole realm of cartoon critters.  And, we don't mean that he's called Courage.  First, you've got a little pink pooch that dropped off at an evil veterinarian who, for some reason, sends his loving furry folks on a rocket into Outer Space.  Then, he gets graciously adopted by a duo in the middle of nowhere.  Next, daily, weird supernatural monstrosities show up seemingly bent on disastrous destruction!

While the meager mutt manages to cower from the threats initially, he stands up to defend his beloved Muriel (and even that other guy) every time no matter what he faces (or how many faces the thing has).  After all that and still being known as the cowardly dog!?  Well, that's hardly right!  If only Courage could more often explain what's going on and actually be heard.  Leaves us wondering if everyone's best buddy can actually talk or if it's just us who is hearing...

Practice your pupper pantomiming with this officially licensed Pajama Costume of the titular character from Courage the Cowardly Dog.  Created stitch-by-stitch from our own team of dog-loving designers, this exclusive and cozy pair of PJs feature a loose fit and dropped crotch with a hidden front zipper.  All in pink minky fabric (except for the black spots on Courage's back), this costume is going to be super comfy whether you're relaxing or saving your besties from danger.  The attached hood feature's Courage's worried eyes, short whiskers, and long brown ears and nose.

BUT WHERE IS YOUR MURIEL!?

Once you kick your paws up in this uber-comfy Courage Pajama Costume, you'll be able to instantly fall into a delightful dog nap... at least until you realize that you might be missing a Muriel!  Head off on an adventure to save her or just maybe take a break for once.  You've certainly earned it!