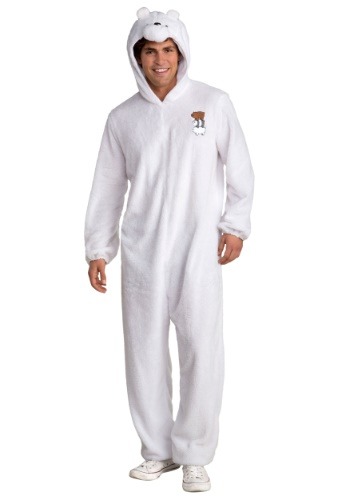 Ice Bear is an ursine fellow who is wise beyond his years. We assume he has studied the ways of Lao Tzu, since he adheres quite fiercely to wise old adage, “He who speaks, does not know. He who knows, does not speak.” Ice Bear spends much of his time observing his brothers and the world around him, speaking only when the world requires his wisdom. That’s when he will quietly lean in and say, “Ice Bear knows,” or maybe something like, “Ice Bear regrets eating that,” or maybe, “Ice Bear smells like clean babies.”

Okay, so maybe not everything that Ice Bear says in We Bare Bears is completely wise, but he always does come through with a great one-liner when the time calls for it. Now, you could be the master of the wise (and sometimes just plain silly) one-liner when you wear this We Bare Bears costume for adults.

This Ice Bear costume is an officially licensed costume from the Cartoon Network show, We Bare Bears. The costume comes with a full-body jumpsuit made out of soft, white fabric. A small We Bare Bears logo appears on the front with Grizz, Pan Pan, and Ice Bear on it. The jumpsuit also comes with an attached hood that has Ice Bear’s face designed into the top, including a pair of stubby little ears, a pair of black eyes and a little black nose. Unfortunately, the costume does not smell like clean babies (unlike the real Ice Bear).

Once you have this cozy costume on, you’ll be feeling the Ice Bear flow. You might even be ready to drop onto the scene with some well-timed jokes. You might even find yourself speaking in the monotone stylings of Demetri Martin…