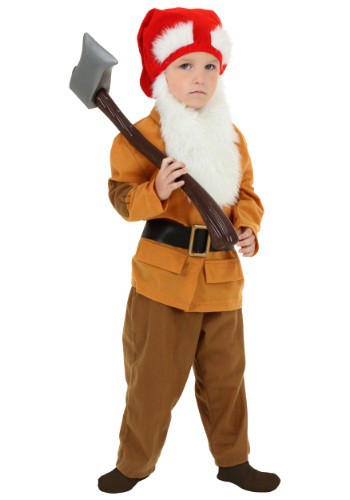 Snow White is headed out of town for the weekend, and she needs someone to watch the youngest of the seven dwarfs (don't be fooled by that long, flowing white beard of his, because he still needs plenty of adult supervision). Think you're up to the task? It's true that the little guy is a high-spirited gold and silver miner who loves to sing, but he's not so bad when the other six dwarfs aren't around. In fact, if you take him around the neighborhood and go door to door asking for candy, he's sure to tucker out by bedtime. See? He's a piece of cake, and also indisputably the cutest of Snow White's seven little pals. So bring him into your life, if only for Halloween, with this adorable Toddler Brown Dwarf Costume!

Made by us, this exclusive costume will completely transform your little guy into one of the most beloved fairy tale characters around. He'll be one of the seven dwarfs from head to toe, literally. That's because the outfit comes with a hat that has attached white eyebrows; a patchwork shirt that looks like it belongs to a hardworking fairytale miner; a belt with a big gold buckle; pants and shoe covers; and, of course, the big white beard.

And if you feel like joining in on the fun and doing a family "themed" costume for Halloween, the Toddler Brown Dwarf Costume goes great with a Snow White costume. So be sure to have a look around at our wide selection!