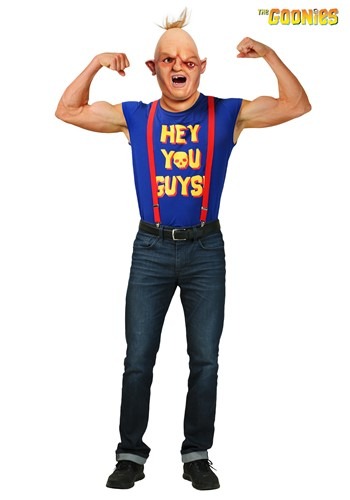 Adventure can find you in different places. Maybe you were looking for it or stumbled upon it randomly. Or, if you're like Sloth, you just got caught up in it because your family of criminals dragged you along with them! Hardly seems fair for poor old Sloth, but at least it turned into a grand new life for the lovable lug!

Of all the iconic characters in the cult classic The Goonies, Sloth is definitely the most memorable. Maybe it's his grotesque looks, his soft but fearsome personality, or his famously quotable catchphrases—including the best surprise greeting ever heard—Sloth is the star of the show! He's also the one who made the biggest character leaps during the adventure. After starting out as the dimwitted, deformed member of the Fratellis gang, just brought along for muscle and chained to the wall when he wasn't needed, he quickly turned into a swashbuckling superhero after he befriended Chunk and the other Goonies. It turns out he makes a much better Goonie than a Fratelli.

Get ready for serious fun with this officially licensed Sloth costume from The Goonies. This is a Made by Us look that our in-house design team created inspired by the epic character. The mask is designed to replicate his look so you look just like the big-hearted guy. You could even wear an old button up shirt over everything, which you could tear off to reveal the Hey You Guys! costume shirt underneath at a particularly heroic moment!

If you really want to win the Sloth look, accessorize further with a captain hat so you can sail out and win the day for the Goonies. And don't forget to bring your whole gang of friends along on your adventures, in our other awesome costumes from The Goonies! Especially Chunk, Sloth love Chunk.