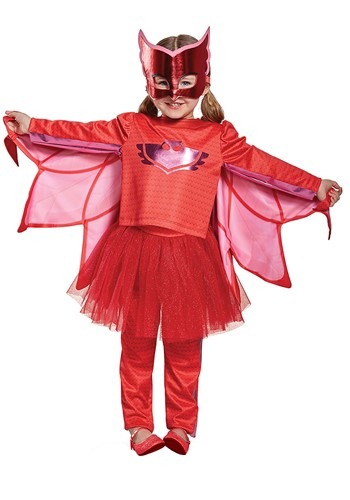 Our favorite part of the PJ Masks television show is when Owlette swoops onto the scene. Her super planning skills mean any adventure the team undertakes is going to be successful, and when we see her cruising in on her Owl Glider we know that it's going to be "Super Owl Wings!" time.

Maybe you're not up to speed on all of Owlette's awesomeness, but if you've got little ones, we're guessing that they sure are. The hit Disney Junior show has been a fan favorite among children since it started airing in the US, and the trio of nighttime heroes are characters that any child can have plenty of fun emulating.

So, if she's got her sights set on being Owlette this Halloween, this Prestige costume will be just the look to make her Halloween dreams come true! Styled as a top, leggings, and tutu skirt ensemble, along with a dazzling cape and character mask that glows in the dark, this elite costume is officially licensed, and it's ready for all of the action that she's ready to bring to life!

The printed top has a pattern that looks just like the armor the Disney character wears on her missions, and of course, a shiny logo is printed on the chest. The pink printed feathers on the cape perfectly contrast with the red of the outfit, and she can use the fabric wrist straps to pretend she's soaring over the city. The glittery tulle tutu adds a touch of elegance, and all you'll need to do is pick up a pair of flats that match the ensemble.

Size Chart
3T/4T4/6
Inches
Centimeters
Costume Sizing Tips
Questions & Answers
There are no questions for this item yet. Be the first to ask a question!
Ask a Question