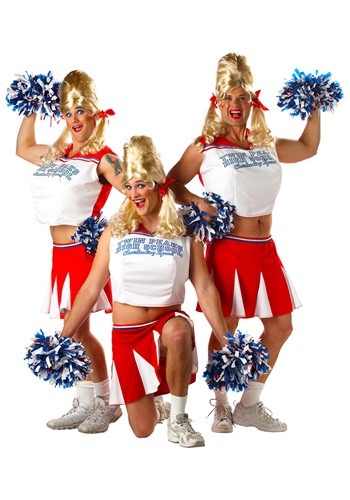 Pep talk your best pals into this hilarious group costume, and we can almost guarantee you’ll steal the show from everyone else at the big Friday night party! This Mens Cheerleader Costume is downright hysterical and you know what they say: the friends who dress like cheerleaders together, stay together. OK, so no one says that. But they should. We’ve received countless letters from buddies who have touted this costume’s friendship-building power. “I liked my buddy, Jay,” wrote one satisfied customer, “then I saw him do a herkie in this hilarious outfit and I yelled out, ‘I freakin’ love you, man!’” “

I thought my Halloween party last year would be a bust, just another stupid costume party,” Dennis wrote to us, from Altoona, PA. “Then my best buds showed up in these cheerleader costumes and the party went viral!” As you can see, this costume’s midriff bearing shirt, pleated skirt, and...ahem...inflatable bosom will bond you indelibly to your whole squad. So grab your pom poms and warm up with a few high kicks and spirit tucks. Then go ahead and pick up a wig and get ready to represent Twin Peaks in style. Or at least in solidarity. Together now: two, four, six, eight, who do we appreciate?