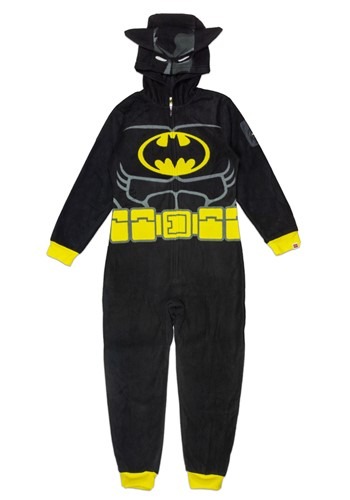 Nighttime arrives in Gotham. There’s a chill in the air. You’d expect something bad to be coming. But it’s Halloween and excitement builds as the sun disappears. Now, let's get some music going. Haunting, spooky music that makes even plastic knees shake... but with anticipation for what is about to come. Candy. It’s time for candy. Candy that Batman got. Oh, Robin? Batgirl? Yeah, they can come along. Batman is cool with sharing. Alfred can keep it all organized. The Joker? Sure, why not. What's Batman got to worry about by keeping a clown around? Batman is tough. Super tough. If your child wants to make Halloween as awesome as Batman’s they just need the right costume. Like this Lego Batman Union Suit.

It starts with black. All the best wardrobes start with black fabric. Then it has accessories. Printed, unbreakable accessories that make parents happy. And logos. Really recognizable and dramatic logos. Batman. Why not The Dark Knight? We don’t know. Hmm, not sure what the zipper’s for, but it blends in. Probably makes it easy to get dressed. We dig it. Okay. Your child is going to be super ready for some trick-or-treating as Lego Batman. But super cozy, like this jumpsuit. Yeah, it’s super cozy. But still tough. It has printed pecs and a nine-pack. Yeah, it has an extra ab—it’s just hidden behind the utility belt.

Lego Batman is Gotham City cool. Tough and broody. But dynamic. He’s got friends and loves trick-or-treating with them. Your child will have the coolest Halloween as Lego Batman. The neighborhood won’t be prepared for how awesome it’s going to be. But your child will. They’re Batman. The hero Halloween deserves. Ready to protect, defend, and eat lots of candy. They deserve all that candy. On Halloween, all the candy deserves your child.