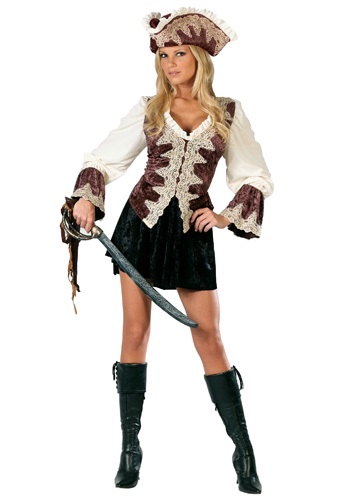 Tomorrow we sail for Tortuga! Avast me 'earties. Yo ho!

They said you couldn’t be captain. That a woman could never command a ship. There would be dissent among your ranks, and the men would mutiny. Well we say pish at that. You would be a fantastic pirate captain. And your crew would follow you to the ends of the earth.

It can be hard to be a captain, but we believe in you. We just think you might be missing something to really drive home that you ARE the captain. This Ladies Royal Pirate Costume will cement your standing in the eyes of your crew. The brown top has puffy sleeves to keep you cool in the hot Caribbean sun, and no one will be able, or even want to, contest your claim to captain when you are wearing this brown and gold hat. Because as Captain Jack Sparrow says, "Nice hat." Any other ship that comes upon yours will just hand over their gold, and other valuables to your fearsome crew.

We believe that any crew, of male, or female pirates, would stick with the captain that gets them gold. They will even mutiny against the current captain for you. Captain No Gold over there will be glad to step down, and let you take up the position. Don't forget to grab yourself a Pirate Cutlass to keep your crew happy by bringing in the gold. (And maybe a Toy Pirate Pistol to keep any mutinies in check.)