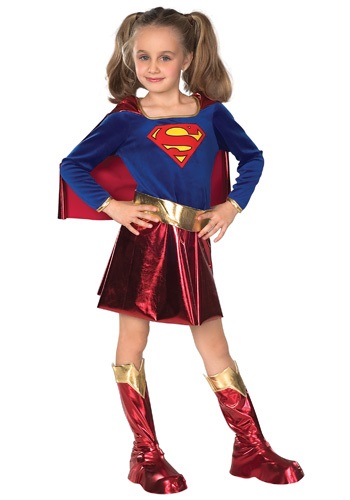 Look! Up in the sky! It's a bird! No, it's a plane! No, it's Superman! Nope, wrong again because it's actually Supergirl! Aha! You thought we were going to say Superman, didn't you? No, you probably didn't because when you clicked this link it said "Supergirl" and you obviously know how to read (you made it this far!) so why on earth would you click here expecting Superman? You know what, we've gotten a bit off track. Supergirl is here! Yes, your little girl has always dreamed of kicking butt, whether her big brother or some school playground punk who needs a lesson.

But how can you encourage such violence? How can you help your daughter understand when it's acceptable to use her super powers and when it's preferable to talk things out? With Supergirl, that's how! Supergirl isn't just about brawn, about using Earth's sun to gain heat vision or flying powers. No, Supergirl is a girl who knows she's different, caught in a completely new environment, and struggling to understand how to fit in. Sound familiar? Like every year of school ever? Right? This costume isn't just some jazzy, flashy "comic book" costume. This costume is about giving your little girl the power of confidence, the power of knowing that it's okay to stand out and be different, and there is strength in that. Because your daughter isn't going to bow down to some queen bee in her class, she's going to defend herself, and her friends, and say enough is enough. And maybe, just maybe, Supergirl isn't teaching her, but she's teaching Supergirl. Think about it.