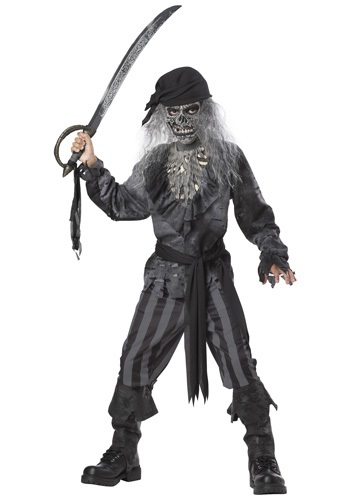 Pirate, skeleton. Pirate! No, wait. Skeleton. Your kid has been changing his mind every five minutes about what costume to wear. First he was set on being a swashbuckling pirate. Cool. Then he came home from school saying everyone was going as pirates; he wanted to dress as a scary skeleton, instead. Then of course, his soccer team picked a pirate theme and he’s not sure you understand that his ENTIRE LIFE rests on this one decision! Gosh, Mom, don’t you get it?! Arrrgh!

Sigh. Since you can’t tell him to walk the plank, why not tell him to try this Kids Ghost Ship Pirate Costume on for size? He can scare his shipmates but still feel part of the team—perfect! Not only does this ensemble beautifully encapsulate your little guy’s dual desires this Halloween, but it also looks crazy creepy and realistic. You can rest assured he won’t change his mind when he sees how cool he looks as he climbs to the crow’s nest (the attic) and surveys the seas.

This set includes a shirt with a detachable chest piece, pants, a full-face mask with attached hair (he’ll likely wear this part around for at least a week), a waist tie, bandana, and boot covers. Talk about a package deal! You can add toy weapons such as a sword or a replica flintlock pistol for an even more fearsome look! But we also understand if you’re ready to just suit him up and send him off to class before he vacillates back and forth about whether or not he needs to go to the pet store and buy himself a parrot.