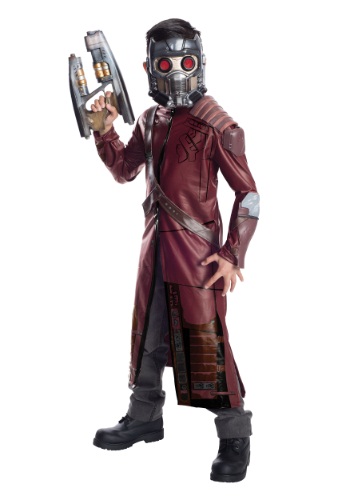 The galaxy can be a pretty tough place, and sometimes it takes a special kind of dude to make a name for themselves. What kind of dude, you ask? Someone good? Someone bad? A bit of both? Whenever your little space dude slaps on this Deluxe Star Lord Costume, they can have a blast being the sorta good/sorta bad hero from Guardians of the Galaxy!

Star Lord (better known as Peter Quill... he's still working on spreading his cool nickname around the galaxy) is definitely the type of tough guy you'd want on your side if you got caught in an outer space shoot out! He's kind of an explorer, with a dash of “space pirate” mixed in, and if his actions don't get him in trouble with the law, his words probably will. But, he's endlessly loyal to his buddies, and a natural leader, even if sometimes he'd rather fly around and listen to classic pop music on his own. Hey, nobody asks to save the galaxy from evil and certain doom when it's in trouble; sometimes you're just part of the right ragtag group of heroes for the job!

This awesome deluxe costume will get your little hero ready for interstellar action when trouble comes knocking. It's officially licensed, so they'll know it looks just like Star Lord's dashing coat in the movie, with attached foam armor pieces and a bandoleer, and a molded plastic mask that's modeled after his space helmet. Be sure to get them a Star Lord blaster toy (and a Walkman, too, if you happen to have one stashed away) and they'll be ready for action!