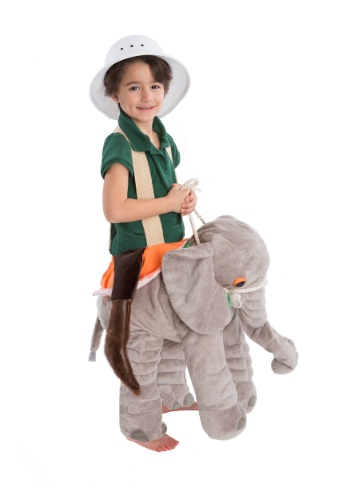 If this Child Ride 'Em Elephant Costume had been designed for Hollywood, the jockey would probably be wearing a bright green skinsuit. Later on, digital artists would give the actor a computer-generated body, a computer-generated saddle, and a big, impressive, computer-generated elephant. But we traded that approach for a smaller stuffed elephant because it's hard to believe that man and beast share an unshakeable real-life bond when it looks like they're trapped inside a crummy video game.

If you want your audience to feel something, you're way better off with a classic gimmick like this one than the massive expense of motion capture and a lengthy postproduction. Sure, the high-tech approach will probably look slick and professional, especially if you're willing to part with a few million dollars. But when the critics say that your film has all the trappings of a blockbuster but none of the heart, don't come crying to us!

Because we're telling you right now: a pair of fake legs is all you really need to make the stars of the film seem totally in-sync as they make a breakneck getaway during the thrilling climax. The actor's real legs, concealed within the stuffed elephant's hindquarters, will propel the two of them forward in unison: a moving testament to the power of friendship against all odds. It's a great illusion, brimming with the old-fashioned charm and movie magic that audiences love and crave (and applaud).