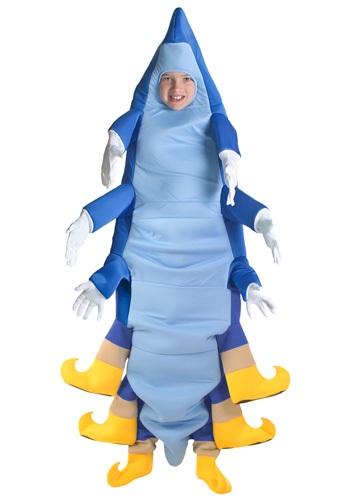 Wonderland's caterpillar is known for, well, not a lot more than being a little rude. But nonetheless, he still wants to help Alice defeat The Queen of Hearts. And we admire his work ethic despite his poor attitude. It's something we admire in all folks, and we're sure you do, too! Like, have you ever been frustrated by a lack of help from your little one? Like, maybe... you just needed a hand with something, and they refused or made excuses or found other things to occupy their time?

Well, fret no more: we have an idea! If they won't give you a hand, how about you give them one? Better yet, how about giving them two, or three, or ten!? They'll have no more excuses with all those opposable thumbs! Or you could gift this to them as a sweet Wonderland-themed costume for Halloween. Either or. If you choose the latter, though, remember the possibilities for a group theme! You could suit up the friends in caterpillar costumes, too, or you could play some poker with a set of cards. Come to think of it... all of these actions of yours are making you seem like a real Queen of Hearts! You could totally have a change of, well, heart and just frolic through the streets with them for candy. That's probably the most probable use, anyway, so yeah, maybe just do that—but your little one gets to knock on all the doors, loud and proud with any of his myriad appendages!