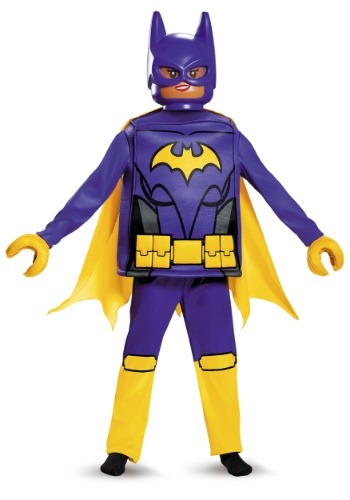 Was she top of her class at Harvard for Police? Yup! Did she clean up Gotham's nearby sister city Bludhaven using statistics and compassion? You bet she did! Does she have new ideas and nunchucks to bring to Gotham City? Yes, one thousand percent!!

Yes, she's Barbara Gordon, and she's ready to become Batgirl. Well, she will be, as long as you get your girl this Batman Lego Movie Batgirl costume! With the key style of both Batgirl and a Lego minifigure, she'll be ready to deploy her new plan: "It takes a village, not a Batman!"

Yes, that's right. Any kiddo will be able to work on getting crime out of Gotham City by taking what's good about Batman, and marrying it to actual laws, and proper ethics, and accountability. Because when your dream is for the police force to team up with Batman, the only thing to do is to get yourself into the action with a Bat costume!

This signature costume is officially licensed from the 2017 flick, and it's ready for all the Lego multiverse action she can handle. With a square tunic top, pants, cape, minifigure mask, and those signature cupped hands, any girl will be ready to put her plans into action!