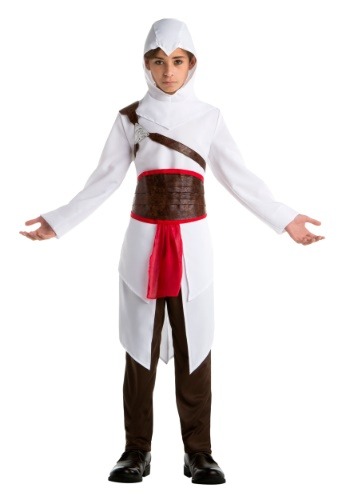 The Assassin Order probably regrets not choosing a more welcoming name. They actually strive for peace in all things and never harm innocent people. They always have a strong disdain for anyone who abuses power. Really, they’re freedom fighters, but the name “Assassin Order” kind of just makes them sound like lawless criminals. So, when you’re child proudly proclaims that they want to be an Assassin, it’s a good thing. They just want to fight against tyranny and the shadowing figures who would secretly try to rule the masses from behind a curtain.

This teen Alistair costume transforms your child into the iconic hero from the video game series, Assassin’s Creed. It comes with a white, long-sleeve, tunic-style top with layers. It has an attached shoulder harness that has faux leather details. The waist also has a faux leather portion with red accents in the front. The pants are black and fit with an elastic band around the waist for a comfortable fit. Finally, the white hood matches the tunic and attached to the tunic with a simple fastener on each side.

So, rest assured. Even though your teen will look like one of the many assassins from the Assassin Order, he won’t actually be required to engage in any violence! He just has to stand up for what’s right and help stop tyranny wherever it lives! You may want to equip your new assassin with one of our many toy weapons to help him accomplish his goal of fighting evil!